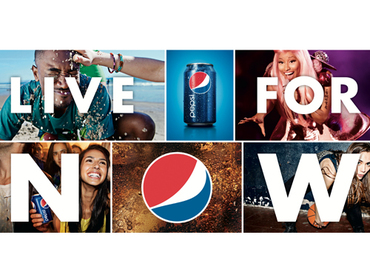 PURCHASE, N.Y.-- Pepsi and Viacom today announced the "Live for Now" summer partnership. The program, which will be run by Viacom, invites and inspires consumers to share photos of their NOW moments for a chance to be seen on-air and win one-of-a-kind event experiences.

The multi-channel program is a part of Pepsi's recently announced "Live for Now" global campaign. It is designed to encourage consumers to get into the Live for Now mindset and showcase their NOW moments using channel specific, branded hashtags.

"Pepsi has a long history of inviting fans to feel inspired through relevant and exciting new experiences," said Heidi Sandreuter, Senior Director Media Strategy and Investment, Pepsi North America Beverages at PepsiCo. "We continue this tradition by partnering with Viacom, a company that truly has a pulse on what is happening now in pop culture, to create a program that is true to Pepsi's brand DNA and speaks to the Live for Now mindset."

The program will be supported by a social media push which includes the Twitter handles of MTV, Vh1, CMT and COMEDY CENTRAL. In addition, Viacom will engage consumers through integrated on-air creative.

"With 'Live for Now,' Pepsi has created the perfect summer rallying cry for our networks' audiences, who are constantly connected and always on the cutting edge of culture," said Rachel Baumgarten, Senior Vice President, Integrated Marketing, MTV Music Group. "Together, we're giving fans the chance to turn the simple act of sharing their own great moments into experiences at the hottest summer events on CMT, VH1, MTV and COMEDY CENTRAL."

Fans who tweet images with the individual hashtags enter for a chance to win exclusive prizes all summer long. Selected images will be featured on-air, in-show and on www.Pepsi.com. Prizes include:

CMT: Fans who tweet images with hashtag #countrynow have a chance to attend the CMT Music Awards on June 6. Three winners will attend the show as a Pepsi NOW Photo Correspondent. The winners will be featured on the pre-show red carpet and their NOW photos taken at the CMT Music Awards will be seen in-show. Also, the winners' photos may be on display at www.cmtlivefornow.com. Post event, their experiences will be recapped within CMT's "INSIDER" and "Top 20 Countdown" programming.

VH1: Fans who tweet images with hashtag #playnow enter to win a chance to be featured throughout the summer on VH1's national morning show, "Top 20 Countdown." Some images may also be available online at www.vh1livefornow.com.

Comedy Central: Fans who tweet images with hashtag #comedynow enter for a chance to attend the filming of the Colbert Summer Music series in August. One winner will travel to New York City and document this day-long event of music performances as the Pepsi NOW Photo Correspondent. The footage will be revealed on The Colbert Report over the course of 1 week. The winner's experience will be recapped on-air and some captured images may be available online at www.comedycentrallivefornow.com.

Pepsi Summer Concert Series: Fans who tweet images with the appropriate MTV, VH1 or CMT hashtags will enter for a chance to win tickets to attend one of Pepsi's Summer Concerts. One winner and a friend will document their experience as the Pepsi NOW Photo Correspondent at the concert and have selected photos featured on-air. Details to be announced soon.

MTV: Fans who tweet images with hashtag #mtvnow all summer long enter for a chance to be one of 3 Pepsi NOW Photo Correspondents at the MTV Video Music Awards on September 6. The winners' experiences will receive on-air national exposure and will be available for viewing online at www.mtvlivefornow.com.

The partnership is slated to run until September 2012. For more ways to participate in the Live for Now mindset, please visit www.pepsi.com.