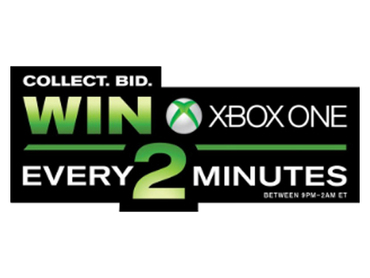 30 Xbox One Entertainment Systems Will Be Auctioned Off Live at PAX Prime, with Six Grand Prize Bidders Getting an Xbox One Before the New Generation Console Hits Shelves

PURCHASE, N.Y. and PLANO, Tex. -- This Fall, the Mountain Dew and Doritos brands will give fans a chance to bid on thousands of Xbox One entertainment systems through the "Every 2 Minutes" online auction experience – one of the ONLY ways consumers can control their own destinies and ensure they get their hands on one. Here's how it works:

Collect – Anyone who purchases specially marked Mountain Dew and Doritos products can collect the codes necessary to enter.

Bank – Starting September 30, participants enter codes at www.Every2Minutes.com to start banking points. Each code also gives you one entry into daily sweepstakes for an Xbox One.

Bid to Win – Starting November 5, participants can use banked points to bid to win Xbox One entertainment systems in nightly auctions closing every two minutes from 9 p.m. to 2 a.m. ET through December 9. Participants can also use points to score exclusive gear in the marketplace until January 7, 2014.

While the online auctions begin later this Fall, the Mountain Dew and Doritos brands are giving some of the most passionate gaming fans a chance to get their hands on Xbox One during a LIVE auction at PAX Prime 2013 in Seattle, Wash. on Sunday, September 1. Thirty Xbox One entertainment systems will be on the auction block and six grand prize auction winners will actually receive the next-generation console before it becomes available for public sale.

In commemoration of the biggest gaming promotion in the history of the Mountain Dew and Doritos brands, DEW is bringing back tried and true gamer-favorite Mountain Dew Game Fuel in original Citrus Cherry and a new, Electrifying Berry flavor. Products will hit shelves in early October and are available for a limited time only.

For complete details or to register for the "Every 2 Minutes" online auction experience, please visit www.Every2Minutes.com. Join the conversation at @mtn_dew or @Doritos #Every2Minutes.