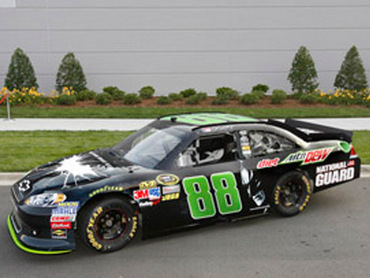 PURCHASE, N.Y. – Dale Earnhardt Jr.'s popular No. 88 Chevrolet went "dark" today thanks to fans of "The Dark Knight Rises" and Mountain Dew (DEW). Following a week and a half of voting at DEWCrew.com, Earnhardt revealed which "Dark Knight"-inspired paint scheme will be featured on the hood of his No. 88 Chevrolet in Michigan next month. In addition to the Bat Shield on the hood, the redesign features Batman and Bane, Gotham City's newest villain, on either side of the car. The unveiling continues to drive anticipation for Warner Bros. Pictures' and Legendary Pictures' The Dark Knight Rises, before the film's opening day, July 20.

"DEW and 'Dark Knight' fans have spoken, and it's pretty cool that the paint scheme they picked is the one I helped create," remarked Dale Earnhardt Jr., driver of the No. 88 Chevrolet for Hendrick Motorsports. "Now that the winning design has been selected, I can't wait to see how fans will react to the car on the track in Michigan."

Members of the DEW Crew were given the option of four different paint schemes to vote on, with each capturing a different element featured in the third and final installment of Christopher Nolan's Batman trilogy. The winning design was revealed by Earnhardt and select DEW Crew members at the Hendrick Motorsports Fan Fest in Concord, N.C., and will race for the first time in Michigan on June 15.

"We're not surprised that the DEW Crew chose the scheme with both Batman and Bane as the winning 'Dark Knight'-inspired design for Dale's Diet Mountain Dew No. 88 car," said Brett O'Brien, Vice President of Marketing for Mountain Dew. "Aside from the Tumbler, I don't think you could find a cooler ride."

Mountain Dew will be bringing fans more unique Dark Knight-inspired experiences next month with a new limited-time-only flavor, Mtn Dew Dark Berry, inspired by the film, and special 16-oz cans of DEW that feature a bat symbol that transforms to the distinctive green color of DEW when chilled. The limited-time offerings will hit shelves in mid-June.

For more information on Mountain Dew and its The Dark Knight Rises promotion, visit facebook.com/mountaindew or follow @mtn_dew on Twitter.