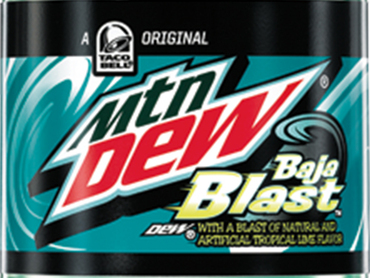 Mountain Dew announced today that, for the first time, Mtn Dew Baja Blast -- which was introduced 10 years ago as a “Taco Bell Original” -- will also be offered for a limited time in bottles and cans, starting May 5. While Mtn Dew Baja Blast is always available at Taco Bell, consumers will have to move fast to buy it at retail, as the fan favorite will head back to Taco Bell exclusively at the end of the summer -- or when supplies run out.

Mtn Dew Baja Blast is the second-largest and fastest-growing fountain beverage sold at Taco Bell. It is the most-requested flavor among the DEW Nation, and has generated more than 30,000 mentions on Twitter in the past three years.

“Mtn Dew Baja Blast has been a fan favorite for 10 years, and we’re thrilled for this first-time opportunity to make it available on store shelves this summer,” said Greg Lyons, vice president, Marketing, Mountain Dew. “We’ve been humbled by the amount of speculation and consumer buzz around Mtn Dew Baja Blast being bottled and are confident that this limited-time offer is going to be a blockbuster.”

Also on May 5, fans will be able to download and play the “Baja or Bust” mobile gaming app. Based upon the popular Motocross app, “Baja or Bust” will be available for iOS and Android platforms and allow fans to enter under-the-cap codes to unlock in-game upgrades and enter for a chance to win exclusive prizes.

Visit the DEW page on Facebook, and join the conversation at @mtn_dew and @TacoBell, #SummerOfBaja. Read an exclusive from the Associated Press.